How the Curiosity Mars Rover Will Land and Navigate

Posted by The American Aardvark at 12:10 AM No comments:

Statement by the President 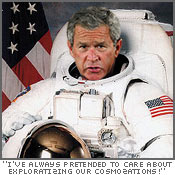 THE PRESIDENT: My fellow Americans. I come to you today to propose a wistfully feel-good, election year NASA boondoggle of unprecedented scale and coolness. Some may charge that in light of the gazillion dollar deficit I have created, we can't afford it. To them I say, "We're Americans, and we deserve anything we want – especially when we stop lavishing our tax dollars on irresponsible luxuries like antibiotics for grandpa, veterans' benefits, and school lunch for ghetto trash!" (Applause.) This is an exciting plan for NASA – one that has evolved over time. Truth be told, my original idea was to invoke that good-looking guy John Kennedy, and come out here and say, "I believe that this nation should commit itself to achieving the goal, before the decade is out, of landing a man on the Sun and returning him safely to Earth. We choose to go to the sun – not in the day, when it's hot – but at night, when it is cooler!" But after much arguing, my advisors have convinced me to focus on Mars instead. And so, without further I-do, I am pleased to present my selfless dream for the future of American space achievement. 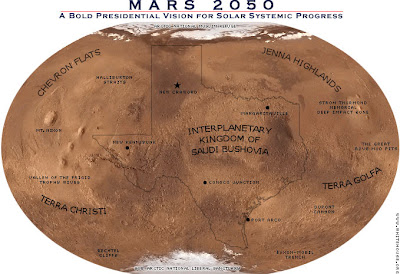 Posted by The American Aardvark at 11:46 PM No comments: